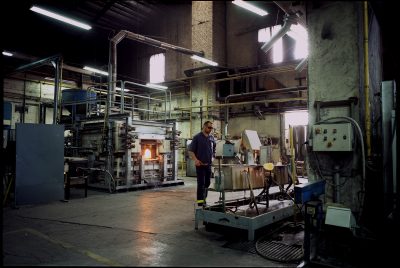 BIASA is pleased to announce the first presentation in Asia of ‘ecce’, a video by French artist Laurent Montaron at BIASA ArtSpace in Ubud, Bali.

‘ecce’ (2018) was shot in super 16mm at the glassware of Saint-Just in France, one of the last production factories to use the traditional technique of blown glass. The film is made as a documentary and follows the process of making a glass sheet. The transparent object is hardly visible in the picture, letting the viewer imagining the aim behind such manual work. The incessant ballet of the workers evokes Beckett’s world in itself, animated by the absurdity. At the end of the production line, the imperfect glass sheet is broken and returned to the liquid state before being blown again, repeating the cycle indefinitely.

The title ‘ecce’ refers to the Latin word, which means ‘behold’, and it refers to the famous phrase, ‘Ecce Homo’, said by Pontius Pilate while addressing Jesus Christ; it has also been often used as the title for many paintings in the history of art. However, Montaron’s action of removing the word ‘Homo’ brings new meanings, moving the focus of the discourse from the human subject to the object/subject.

At BIASA ArtSpace, the ‘ecce’ is projected onto a freestanding screen (three meters x five meters) installed diagonally in the empty exhibition space, transforming the video into an object, creating new avenues for investigations focused on how we think through tools and objects. The presentation of Montaron’s work marks BIASA’s activity of supporting art locally and internationally, creating a bridge between the island of Bali and the rest of the world. With ‘ecce’ in Bali, BIASA offers a big opportunity to locals to encounter an extraordinary artwork and to have a direct encounter with one of the most interesting voices in the contemporary art landscape.

Laurent Montaron (born in 1972, Verneuil-sur-Avre, France; lives and works in Paris) is an interdisciplinary artist working across film, photography, installation, sound, performance and objects. His works draw from the history of technology to examine systems of belief, investigating the ways in which innovations have continually given rise to new ways of observing and understanding the world. Through his critical investigations of the media and tools that shape our representations, his work lays bare the paradoxes that accompany our awareness of modernity.

He is currently preparing a monograph with Mousse publishing.

‘ecce’ will be on view at BIASA ArtSpace Ubud from October 23 to November 16, 2019, everyday from 9AM to 7PM. BIASA ArtSpace is located in Jalan Raya Sanggingan, Ubud, Bali. For more information about BIASA ArtSpace and the current exhibition, please contact marketing@biasagroup.com

THIS EXHIBITION IS OPEN TO VISITORS FROM
23rd October to 16th November, 2019 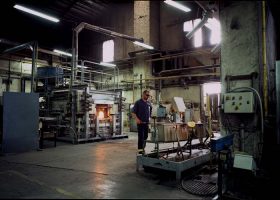