After a successful soft opening of BIASA+ combining art, fashion and lifestyle in December, which saw BIASA ArtSpace in Seminyak completely transformed into a uniquely curated retail space, an exhibition schedule announced the opening of Arya Pandjalu’s ‘Garden of Delight’ exhibition on level1, the new official home of BIASA ArtSpace Bali. The exhibition, which was first shown in BIASA ArtSpace in Jakarta, opened to the public on January 25th ending on March 31st, 2014.

Nicknamed the ‘bird-man’ after his signature character, Arya Pandjalu is a well-known contemporary artist who currently resides in Jogjakarta. Pandjalu, who has exhibited with BIASA Artspace in the past on projects including ‘Bird Prayers’, presented a series of life-size papier-mâché figures introducing salvaged materials such as tables, chairs, shelves and even a guitar.

‘Garden of Delight’ was inspired by Pandjalu’s research on the contradictory nature of the environment and its effect on human survival. As part of his concept, the contemporary artist transformed the gallery area into a public indoor garden using synthetic grass, inviting visitors to a unique space where they are able to interact and relax. Through this transformation, Pandjalu intends to offer visitors an experience of the appropriation of public spaces, flipping our general understanding of indoors as ‘private’ and outdoors as ‘public’.

THIS EXHIBITION IS OPEN TO VISITORS FROM
25th January to 31st March, 2014 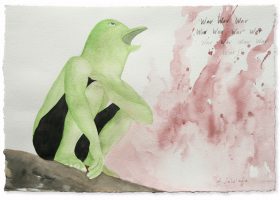 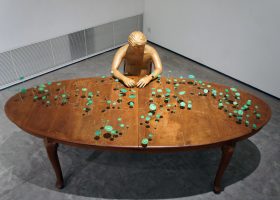 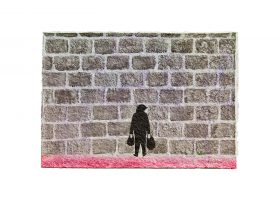