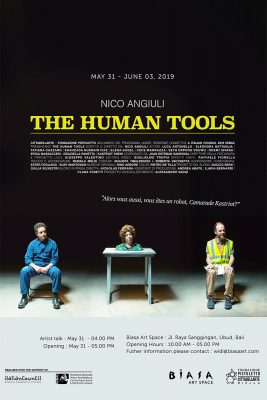 BIASA is pleased to present “The Human Tools,” a project by Italian artist Nico Angiuli.

This project is part of BIASA “hosting program”, in which BIASA becomes the host of other art initiatives. The program started in 2017 when BIASA hosted “Domesticity VII” exhibition by Kayu Lucie Fontaine in the Jakarta space then continued with hosting Honold Fine Art for their exhibitions “P.A.R.A.D.E.” by Sally Smart and “STUFF…” by Ashley Bickerton at BIASA Glass Cube space in Bali. This program follows BIASA mission to support local and international artists and institutions and underline the brand’s philosophy “we are a unique expression of art, idealism and lifestyle.”

“The Human Tools” is the filmic project by the artist Nico Angiuli curated and promoted by Cittadellarte – Fondazione Pistoletto, among the winners of the 3rd edition of the Italian Council open call (2018), a competition conceived by the Directorate-General for Contemporary Art and Architecture and Urban Peripheries (DGAAP) of the Italian Ministry for Cultural Heritage and Activities to promote Italian contemporary art around the world.

Triggering a reflection on the theme of the humanization of ‘humanoid’ machines analyzing the de-humanization of the human being: this is one of the key objectives of Nico Angiuli’s experimental film – developed through periods of residency and workshops, and involving professional and amateur actors, interns, migrant workers and also robots.

The spaces of Fondazione Pistoletto hosted workshops which saw the participation of international guests from fields like the worlds of robotic and artificial intelligence, work sociology and investigative journalism. Specifically, the speakers of the meetings were Rosario Sorbello (co-director of Roboticslab – the department of industrial and digital innovation of the University of Palermo), Albert Nikolla (executive director at Coherent Development Albania, Tirana) and Jean-René Bilongo (migration manager for Flai-Cgil).

“Thanks to MIBACT’s innovative project, the Italian Council has given us an opportunity to develop a new chapter in our long and articulated history of residencies, productions, studies and courses that Cittadellarte has carried out in over twenty years of work. Nico Angiuli has taken his research into Cittadellarte’s beating heart creating a connection with its spaces and foundations: what role does art assume within the social context? We call ‘connective residency’ the experience allowing Cittadellarte to accommodate the personal research of an artist including it in its own ecology. Nico Angiuli has enriched the research of Cittadellarte’s Work office and had the opportunity to fully immerse himself in the multiple activities of our other Uffizi.” (Paolo Naldini, director of Cittadellarte – Fondazione Pistoletto)

“For about ten years Angiuli has been finely researching on the themes of work exploitation, illegal recruitment and body’s mechanization in farming, and the role of the new migrants. Like a compulsive archivist, he has been collecting gestures and physical movements reflecting a transformation in the role of labor in the post-industrial era. It’s not a coincidence that Angiuli’s new project focuses on also robots, a term deriving from ‘robota’, Czech for ‘forced laborer’. In this instance we are not powerless spectators though; we are surrounded by a plethora of characters sharing (human or artificial) existential circumstances in which the body is somehow enslaved. They tell us their unfortunate stories, lamenting them among themselves, and in doing so they seem to comment sarcastically on contemporary life and work conditions, exactly like Rome’s talking statues used to do.

Analysing Nico Angiuli’s entire work, we can definitely identify an element characterizing its final outcome: the artist built a close network of relationships with experts in various disciplines (the director of the robotic research center of the University of Palermo, the manager of the trade unions CGIL who deals with migration, and an Albanian anthropologist, to name a few), organizing public conversations to connect the themes of contemporary forms of enslaved de-humanization with the humanization of robotic machines and the human tool. We could describe this process as a brief educational experience, a school involving all the actors subsequently featuring in the film. For months the artist’s studio at Cittadellarte was in fact animated by a many-voiced debate resembling a sort of permanent brain storming. It is important to emphasize how not only the experts but also the actors played an essential role in this choral experiment: the whole script was in fact based on their personal stories, creating a correspondence between the lives and experiences of the interpreters and the fiction of the narrative.” (Valerio Del Baglivo, visiting curator UNIDEE Cittadellarte – Fondazione Pistoletto)

“The Human Tools” will be on view at BIASA Artspace Ubud, from May 31 to Jun 03, 2019 from 10:00 am to 5:00 pm. BIASA ArtSpace is located in Jalan Raya Sanggingan, Ubud, Bali. For more information about BIASA ArtSpace please contact widi@biasaart.com

Nico Angiuli (b. Bari, IT, 1981) is a visual artist and filmmaker. He attended both Rome’s and Bari’s Fine Art Academy, and completed his studies at IUAV in Venice. He then collaborated with the Stalker group in Rome; in 2007 he co-founded “Ilmotorediricerca”, a collective working on “transborder” projects between Italy, Albania and Greece; from 2008 and 2011 he developed a cycle of sculptures based on Pino Pascali’s unfinished works. In those years he approached the theme of labor with “Ma Vai a Lavorare!” (“You, off to work!”, performance, 2008); “Le Piastrelle Sono Intenzioni” (“Tiles are Intentions”, performance, 2010); “La Danza degli Attrezzi” (“The Dance of the Tools”, videoarchive, 2011-ongoing).

He has directed a few film projects, among which “Otnarat”, a documentary financed by Apulia Film Commission; “Tre Titoli” (“Three Titles”, 2015), shot in Giuseppe Di Vittorio’s native lands; “E Per Te Canterò Tutta La Vita” (“And For You I’ll Sing My Whole Life”), a film on the media relations held by the Albanian population with the Italian media during the communist regime. His latest film, The Human Tools, is financed by MiBAC in the context of the Italian Council Award.

With the curatorship of Martina Angelotti, in 2017 he realized The Tools’ Dance Collective Performance, a show in three acts produced by Careof and the MigrArti open call.

He has exhibited at various venues, events and institutions, among which the 16th Rome Quadriennale, the 2nd Kiev Biennale, Mart in Rovereto (Italy), Fondazione Sandretto Re Rebaudengo in Turin, Fondazione Pistoletto in Biella (Italy), MAAM in Rome, the 4th Athens Biennale, Tirana’s National Theatre, Bosar in Brussels, Fondazione Bevilacqua La Masa in Venice. He has more recently been nominated for the Visible Award 2017 and for the Italian-German VAF Prize 2019.

He is currently visitor professor in Performance at Bari’s Fine Arts Academy.

Cittadellarte – Fondazione Pistoletto is a non-profit artistic institution whose mission is “to inspire and produce responsible changes in society through creative ideas and projects”. It seeks to introduce creativity to various social processes, from politics to the economy, from production to spirituality. It seeks to benefit the public via responsible social change, which is urgently needed on both a local and a global scale. Founded in 1998 by the artist Michelangelo Pistoletto, Cittadellarte – Fondazione Pistoletto is located in a disused textile mill by the river Cervo in Biella, Italy.

BIASA is one of the most established and unique fashion brands on the island of Bali with an international following spanning across the globe.

BIASA ArtSpace was founded in 2005 by Susanna Perini as a natural response to her many encounters with young and talented artists in Java and Bali. It hosted its first exhibition with the intention to present progressive Indonesian and international artists at a time when there was little knowledge or support for contemporary art in the country. Over the years, the gallery has grown to become a distinct container where artists are invited to dialogue and interact with the general public. The exhibitions and projects staged in Bali and Jakarta or in collaboration with national and international art and governmental institutions have progressively become a reference point in the development of contemporary art in Indonesia. BIASA ArtSpace has presented highly acclaimed and up-and-coming artists and has collaborated with institutions in Indonesia and in Europe, including the National Gallery in Jakarta, the Italian Institute of Culture of Jakarta, MACRO in Rome, Delfina Foundation in London and the Indonesia Pavilion at the Venice Biennale in 2011.

The work will be on display and permanently donated.

Written and directed by: Nico Angiuli 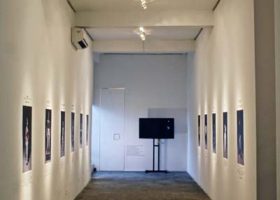 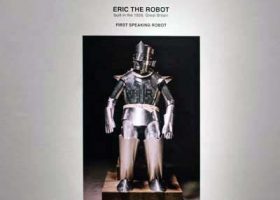 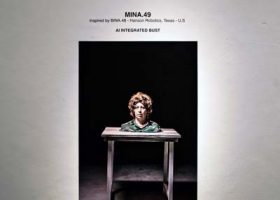 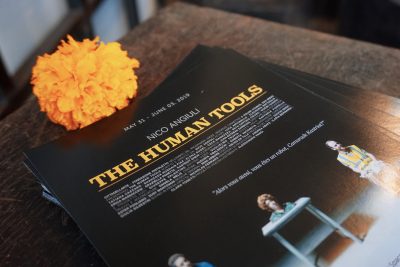 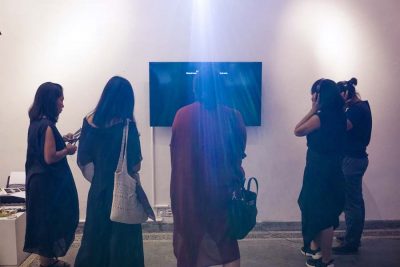 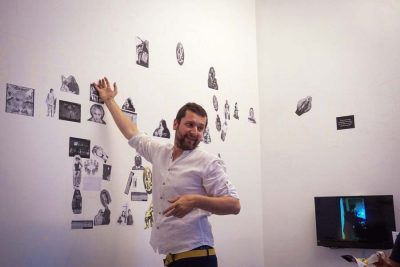 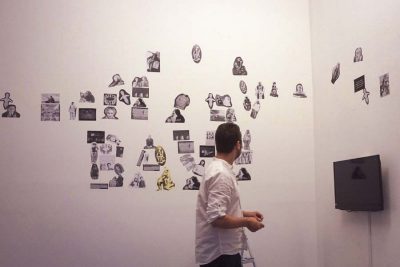 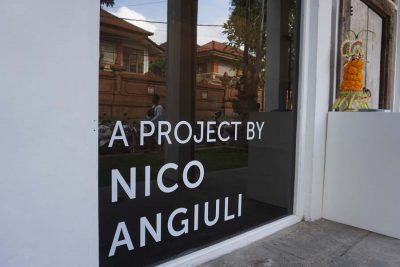 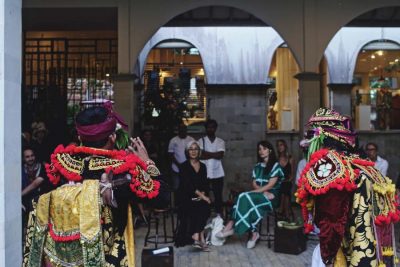